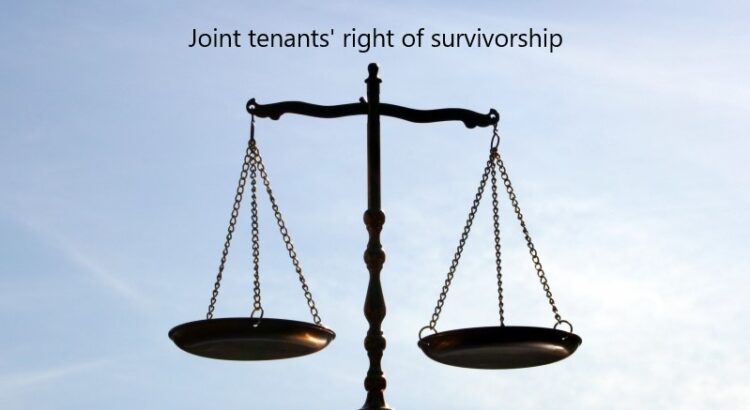 Has a recent court decision changed the law on joint tenancy survivorship rights in Singapore?

In December 2021 Singapore’s Court of Appeal delivered judgement in a case involving a property in the joint names of a father and daughter. It was a HDB flat held in joint tenancy. Notwithstanding the joint tenancy the father’s Will gave the flat to his son.

Some people think that the court’s decision has somehow changed the law on joint tenancy. They believe that the concept of right of survivorship has been thrown into doubt by this case. It’s been said that this decision means “a surviving joint owner of a property does not have an automatic right to inherit the property if this is clearly not the intention of the other owner”.

The case in question is Lim Choo Hin (as the sole executrix of the estate of Lim Guan Heong, deceased) v Lim Sai Ing Peggy [2021] SGHC(A) 22. We shall refer to it as ‘the Lim Estate case’.

Is the Lim Estate case a landmark case that’s a ‘gamechanger’ as some think? Let’s look closer at it but please read our previous article on “Joint Tenant, will, survivorship right – the basics” (http://blog.ezwills.com.sg/property-joint-tenant-will/) first if you need to understand the basics.

In 1976, Mr Lim Guan Heong (“Mr Lim”) bought a HDB flat and became its sole registered proprietor. In 1981 Mr. Lim added his daughter, LSI, registered as a joint tenant of the Flat (“the 1981 Transfer”) with him. In 2001, Mr. Lim added another daughter, LCH, as a third joint tenant of the Flat. LCH later removed her name from the Flat of her own accord in 2013 as she wanted to get a HDB flat of her own.

Upon Mr Lim’s death in 2015, LSI became sole registered owner of the Flat under the right of survivorship accepted in Singapore. This was despite a Will which Mr Lim made on 27 April 2015.

LCH applied as Executrix of Mr. Lim’s estate by Originating Summons for a declaration that LSI held the Flat on trust for the Estate of their late father, Mr Lim.

LCH’s case was that Mr Lim had only transferred the Flat to LSI as a matter of administrative convenience, and/or because he was concerned that since he did not actually stay at the Flat after 1981 when his wife passed away, the Flat might be repossessed by the HDB if it were not occupied by its owner.

LSI was the only one of Mr Lim’s eight children who was suitable to become an owner of the Flat in 1981 with Mr. Lim. The other children were either estranged from Mr Lim or unable to satisfy the HDB’s eligibility criteria for ownership of the Flat.

The High Court judge hearing the original application decided that the documentary evidence showed that Mr Lim had intended to confer his beneficial interest in the Flat to himself and LSI as joint tenants by way of gift and saw no need to engage in any analysis relating to the presumption of resulting trust or the presumption of advancement.

LCH appealed to the Court of Appeal from the High Court decision.

The Court of Appeal said “whether the right of survivorship under a joint tenancy is capable of overriding the presumption of resulting trust – did not even arise from the Judge’s decision”.

To be clear this case did not involve these issues:

The Court of Appeal very, very clearly stated that “the central issue in the appeal was whether the Judge erred in finding that the documentary evidence was, on its face, conclusive of Mr Lim’s intention to gift a beneficial interest in the Flat to LSI (emphasis ours)”.  Was the evidence clear that Mr. Lim intended to make a gift to LSI?

On this issue, the Court of Appeal said that the Judge’s approach was incorrect. It said that although the Title Deed and the 1981 Transfer Instrument were contemporaneous records, they could hardly be said to be conclusive of Mr Lim’s actual intent or state of mind as at the time when the 1981 Transfer was effected.

In other words, just because the title deed was in joint names and Mr. Lim had signed the 1981 Transfer document isn’t the end of the matter. The court can consider the evidence behind the coming into being of these documents. The Court of Appeal noted that our courts have previously found that properties were held on trust for the transferor in the face of transfer documents suggesting that the transfer had been intended as a gift.

What evidence did the Court rely on?

In its decision the Court of Appeal noted that LSI had not contribute to the purchase price of the Flat to begin with and also did not make any payment to Mr. Lim in return for the 1981 Transfer to her as a joint tenant.

The Court of Appeal said that the weight of the evidence as a whole did not support LSI’s position that the 1981 Transfer had been intended as a gift. Rather, there were several reasonably noteworthy indicators that Mr. Lim did not have any positive donative intent in having LSI added as a joint tenant.

The three main indicators relied on by the Court of Appeal were:

In looking at LSI’s conduct the court noted:

The Court of Appeal found that the total evidence was sufficiently strong to establish, on a balance of probabilities, that Mr Lim did not intend to gift a beneficial interest in the Flat to LSI. LSI didn’t behave as expected if she genuinely believed she had owned the flat as a joint tenant.

In the end the Court of Appeal perhaps easily decided that LSI, being the sole legal owner of the Flat after Mr. Lim’s death, held the Flat on resulting trust for the Estate. It granted LCH the declaration of trust sought and made additional orders requiring LSI to deliver up possession of the Flat to the Estate.

What the case is not about

Had Mr. Lim chosen to transfer the flat into LSI’s sole name and not to her as a joint tenant the dispute would still have arisen and the parties would still have made similar arguments (save for any argument about survivorship rights) with the same decision by the Court of Appeal.

Anyone thinking Lim’s Estate case is about survivorship rights of a Joint Tenant has completely missed the point.

What the case is really about

A recent press report suggests that Lim’s case has somehow changed the law and that despite a joint tenancy and survivorship you may now be able to will away a joint tenancy property. That report claims that:

and goes on to claim further that:

“It (the court) noted that a surviving joint owner of a property does not have an automatic right to inherit the property if this is clearly not the intention of the other owner”.

The Lim Estate case is really about whether or not a property is held on a resulting trust despite what is stated on the title deed and in the Transfer document. It’s about whether a person had been gifted property by the Transfer.

As mentioned, the property could have just been transferred to LSI in her sole name rather than as a joint tenant. The fact that it was a joint tenancy was never a relevant factor in the dispute.

Ultimately the question before the court was ‘is LSI just a trustee of the flat, or isn’t she?’ much like ‘is this a duck or isn’t it?’ and nothing more.

That same press article also had the headline ‘Signing a legal to sever the joint ownership will ensure a specified share of the property’. This also is unequivocally wrong.

We say this from actual knowledge of what happened in one actual case.

Right of survivorship in Singapore

Two other statements were made in that article on the Lim Estate case.

First it said “it is common for families to give property to spouses or children by way of “gifts” so that there is no need for the recipients to pay anything for the property”.

Second it also said that the Lim Estate case “is expected to have an impact on property inheritance planning, especially for HDB flats, which are usually held in joint names”.

We don’t know if there’s any basis to support the statement that it’s common to give property to spouses or children by way of “gifts” in Singapore.  It’s probably common with HDB flats that in the event of a parent’s death, a joint tenancy of the HDB flat is then created with a child. As with the Lim Estate case this may be done out of fear that HDB might repossess the HDB flat if it were not occupied by its surviving owner.

With private property there is no compelling need to be gifting it to anyone. It may just be a uniquely Singaporean thing for HDB flats to be ‘gifted’ to other family members to avoid repossession by HDB.

Before anyone starts losing their minds about the impact on property inheritance, it needs to be pointed out that therein lies the problem with the two statements made in news article. On the one hand you can’t say that it’s common to make gifts or real estate and on the other hand raise concerns about the impact on property inheritance planning, especially for HDB flats, held in joint names.

Whether a HDB flat is transferred into joint names or into the single name of that family member the question is always going to be ‘was it a gift or is it held in trust’. It’s got nothing to do with joint tenancy and everything to do with HDB rules and if it is genuinely a gift there’s no need to be concerned about the Lim Estate case or it’s impact on inheritance planning.

Suggesting that the Lim Estate case will impact inheritance planning is ignoring the real problem. It’s HDB flat owners transferring HDB flats as ‘gifts’ when there is no intention to make it a gift but instead to have the transferee hold it in trust.

Anyone genuinely making a gift of real estate to family member or creating a joint tenancy has nothing to fear.

This brings to mind the comedian who was pulled over by a cop after he drove through a ‘Stop’ sign. The conversation went like this:

Cop: Sir. Did you not see the STOP sign?

Comedian: Yes, I did.

Cop: Why didn’t you stop?

Comedian: Because I don’t believe everything I read.

Should you believe everything you read in the press or have rumours of the pending death of the survivorship rights of joint tenancy under Singapore law been greatly exaggerated?